For reasons beyond my control, this week I got swamped by music-project-related chores; among other things, this included putting out an EP, hiring a PR company, and lots and LOTS of design. Not so much a necessary evil as a great kick in the butt that prompted me to *put more art-things out there*, the […]

Project #4, Leaptraveler, was in a way long overdue: a basic exploration of the Leap Motion’s abilities. I’ve had the IR motion-capturing unit for longer than I care to admit and have played around with existing games and demos plenty, but have never gotten around to exploring it properly. 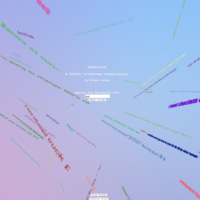 Week 3! This one was a doozy.   Tweecloud (github) is a webapp that molds keyword-filtered tweets from the Twitter API into an amorphous, moving cloud. (It looks better than it sounds).

This week I worked on a basic implementation of webAudio with Three.js visualization to boot. I called it affected.